An Outback Adventure: The Making of the BLM Corporate Video

In the sunshine state where the fun times await.

Ah, for the love of QLD. What a grand state you are. The tropical air hit me like a sugar cane train as the aircraft cabin doors opened. Hello Townsville! Hello humidity! Met with the big smiles of Kym and Chris from Beachport Liquid Minerals as I walked into the terminal, I knew this Outback QLD trip was going to be a trip of a lifetime.

Leaving behind envious co-workers at BLM HQ, my mission was to film three properties with Justin, Dani and Mark from Red Bikini Content Agency to use in our advertising in Northern Australia. We had a full-on itinerary to achieve in six days, but couldn’t wait to get started.

We were briefed at our QLD/NT Regional Manager Charlie Crossley’s house. Charlie lives in Townville with his beautiful wife Annette and has two adult children, Ollie & Sammi. The plan was to drive from Townsville to Richmond, Richmond to Winton, Winton to Alpha and then Alpha to Emerald. 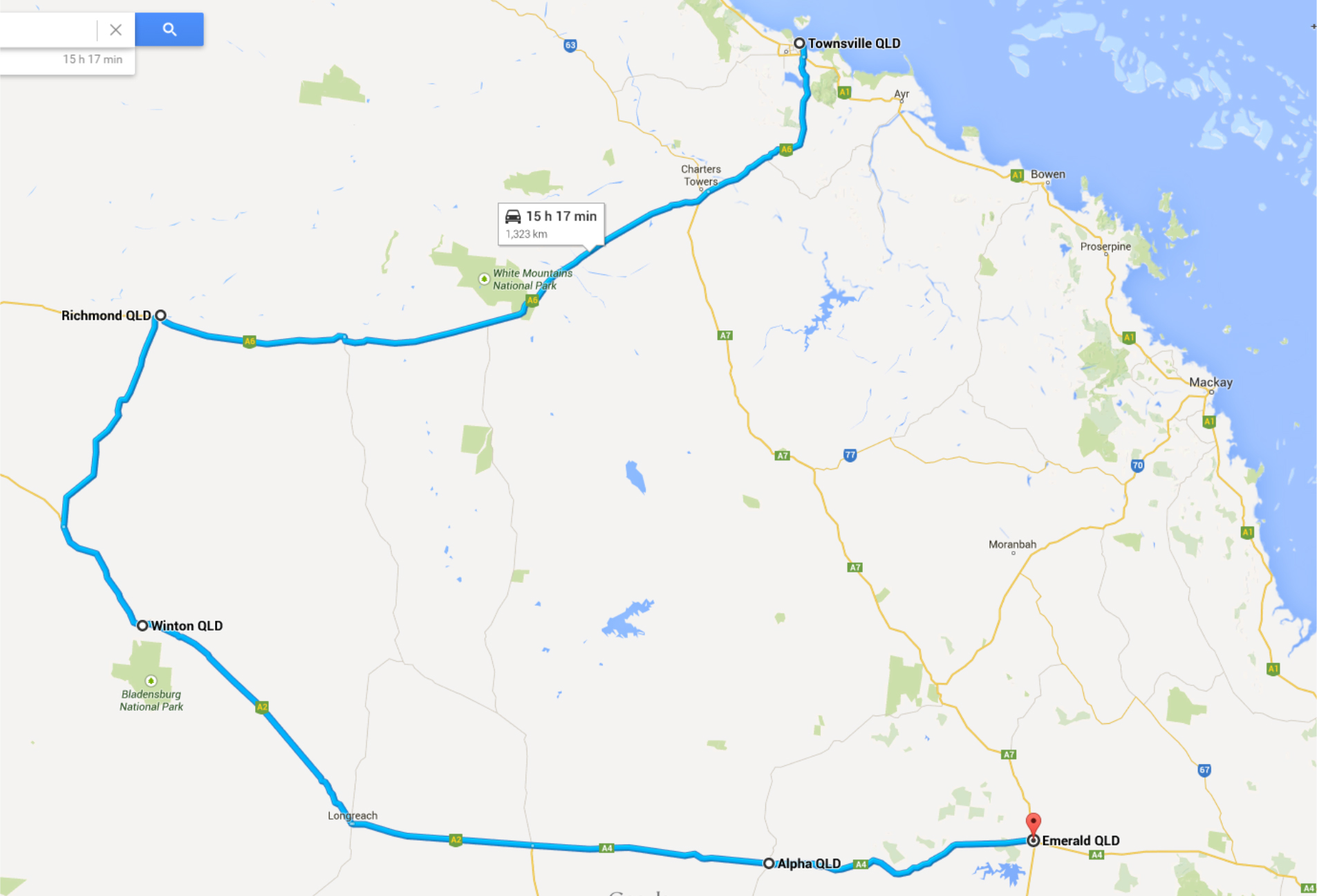 The ultimate road trip began with a drive from Townsville to Richmond, approximately 500kms inland. The bustling town of Richmond has a population of 750 and is close to the geographic centre of north Queensland.

The tourism spots were littered with catchy little slogans, like “You’ll Dig Richmond” as the area once formed part of Australia’s ancient inland sea, and is home to a rich bed of dinosaur fossils. People still visit Richmond to dig for fossils. Anyway, enough of the history lesson!

We travelled about 70km out of town to Burleigh Station, owned by Alister & Jo McClymont. We started by getting some scenic shots of the property in what the film crew described as the ‘Golden Hour’. This hour sits at sunrise and sunset, where the lighting is at its most vibrant.

We found a creek to drive through which made the film crew very excited, so we stopped there and set up. Charlie and I had the job of driving back and forth through the creek to get the “Perfect Shot”. If you have watched our corporate video you will see the 5 second snippet which was the result of 3 hours driving back and forth!

As Charlie and I drove through the creek for the 126th time, it was time to make the trek back into Richmond. There was a storm looming in the distance which had the potential to close the only road in and out of Burleigh. Wow, what a trip!

With 3 sets of eyes on the lookout, it didn’t seem anywhere near enough. The sky was pitch black except for the lightning strikes, and all sorts of insects, mammals and birds were trying their hardest to get in the way of the cars. We rolled into Richmond at 7:58pm and begged the pub to stay open for meals. I think they felt sorry for us so they did, that’s country hospitality for you! Welcome to Outback QLD!

With an early start, we headed back out to Burleigh station. It was time for Alistair’s interview. Kym, Chris, Charlie and I had to walk around in the yards behind Alisters shot to create movement, it was so hot and dusty. Alister is a man that is straight to the point and did an exceptional job in front of the camera. For someone that was a bit reluctant he nailed it.

During the middle of the day, the light was too bright for shooting, so we headed back into town. On the way, we took the time to spot a few emus, with one getting a little too close and bumping into the car. Luckily, he was a tough little bugger and jumped up and ran off quick smart.

After a quick freshen up back in Richmond the team were keen to head back out and get some shots of Alister’s stunning Brahman herd.

Done and dusted in Richmond, the convoy headed 330km south to the home of Waltzing Matilda, Winton. This is where I got my first real glimpse of how bad the droughts were at the time. The paddocks were like carpet and anything green had been eaten by the locust plague. What stood out to me most was the attitude of the locals; never negative, but always optimistic and positive. It almost brought tears to my eyes about how amazingly tough these people were and are.

Rondel Droughtmasters with the Carrington family was our second location for filming. Let me tell you, it was hot! For someone that is affectionately known as a “ranga” with skin that is almost see-through, I almost self-combusted in the hot QLD sun! We stood around in the paddock being munched on by mutant locusts and almost carried away by flies while trying to keep a herd of cows and calves in one spot as we shot Luke Carrington’s interview.

After Luke’s interview, the sunset was looming and it was spectacular! We got some amazing footage as the sunset, but it was still 40 degrees! A cool drink was definitely on everyone’s mind as the beautiful Carrington family welcomed us into their home for dinner. As we sat at the bar, locusts were slamming into our faces as they tried to get at the light. How no-one ate one is still a mystery!

Up nice and early and back out to Rondel. We were able to get some fantastic shots of the stock drinking from the trough with their BLM dispenser. Charlie and I had a chance to get in front of the camera and complete our interviews. NEVER in my life have I been so hot. It was the middle of the day where the mercury hit 45 in the shade! We needed a quick break for lunch to cool down and refresh.

After lunch, Red Bikini got creative. Marc the Cameraman & Dani the Production Manager were hanging out the back of a land cruiser followed closely by a road train. The truck was shot coming into the little town of Corfield, famous for the Corfield Cup! This is a very famous outback race meeting held in August each year in which Beachport Liquid Minerals are proud sponsors. For more information, visit their Facebook page.

We rounded up the dogs at Anrod, a neighbouring property, and let them loose rounding up some cattle in the sunset. The shot with the cattle in front of the windmill features in a lot of our advertising, so keep an eye out for it.

Time to bid Winton farewell and head 427kms to Alpha. The trip was quite a sombre experience as we headed there via Longreach. When we were there, Longreach hadn’t had rain for 3 years and a lot of farms had de-stocked. The roadside was littered with thousands of kangaroo carcasses and thousands more camped out under the trees just wasting away. I’ve never seen anything like it. You often hear about the drought affecting Queensland but you never really know the extent of how bad it is until you’re out amongst it.

The land started to look a bit better as we drove into Barcaldine. There was actually green feed to be seen; amazing what a bit of rain can do. Our third and final filming location was Surbiton Station in Alpha. Surbiton is owned and run by Sean Dillon, his wife Sarah and his mum Elsie. The country hospitality shone through when the Dillon family welcomed us all into their home and offered beds for us to stay.

Despite the weather threatening to rain, we managed to get some great shots of Surbiton’s Santa Gertrudis cattle.

As the sun peeped through the clouds, we filmed Sean’s interview by the side of a creek bed. The herd were kept on the scene by Sarah and another Jillaroo on horseback. As the day came to an end, we were treated to a fabulous feast at Surbiton’s Homestead. Everyone was tired so an early night was appreciated by all.

The next morning, Elsie Dillon made an appearance and was filmed doing the water run. She truly is an inspirational lady. We also filmed a couple of end tags that were used for our advertising for Beef15, State of Origin and the Boxing Day Test. For those of you that saw our Cricket advertising, you might remember the scene of the kids playing cricket. That was Sean & Sarah’s kids, Tia & Ryan. It took about 5 takes to get the shot, but when we got it cheers, rung out across the paddock; it couldn’t have been more perfect! Check out our blooper reel here to see the takes.

We wrapped up at about lunch time as Charlie was the last one to appear on film with his Red Cap plug. It was a good feeling when Justin yelled, “It’s a wrap!”. We said our goodbyes to the Dillon family and thanked them for their hospitality. As we rolled into Emerald, we were quite pleased to be back into civilisation!

After 6 flights and driving over 2500km, our QLD Outback Adventure had come to an end. This adventure was the most entertaining, unpredictable and comical trip I’ve ever experienced. We met some incredibly inspiring people and I am so privileged to be a part of such a wonderful team.

Get the latest blog, straight to your inbox every month, plus valuable industry information & resources!