Although Phosphorus deficiency is typically known as an issue in Northern Australia, feedback from our Regional Managers and clients suggests it’s very much a deficiency experienced Australia wide.

Applying fertiliser to plants is not feasible in Northern Australia due to the vast areas grazed, so Phosphorus is supplied as part of a feed supplement.

If you’ve seen poor-doing livestock chewing bones or had poor conception rates, then we know you would be looking for the reason. Most often our search for answers takes us to Phosphorous. 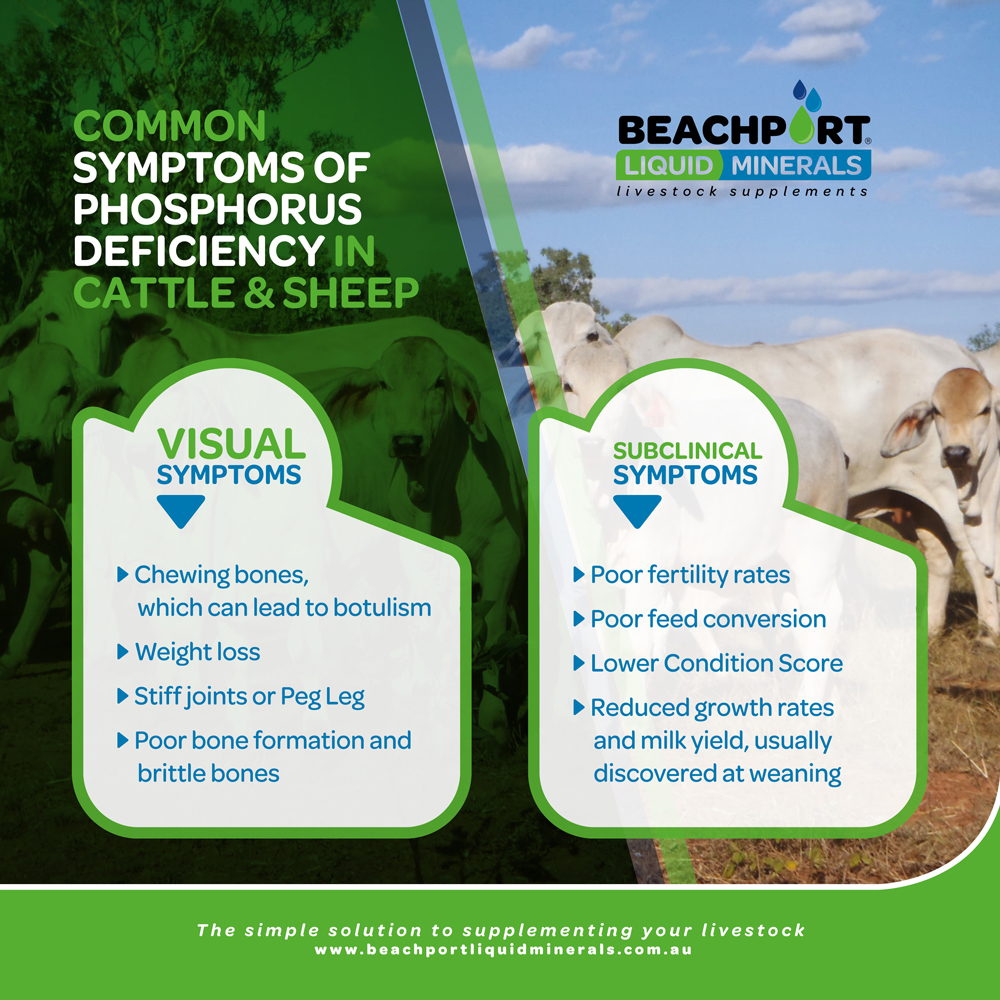 Why is Phosphorus so important?

Phosphorus is the second most abundant mineral in the body but has the most functions of any other mineral.

P is critical for cows returning to oestrus quicker, resulting in a tighter joining and higher conception rates.

P has an important role in energy utilisation, storage, and metabolism. Reduced appetite and metabolism of dietary components directly results in reduced growth rates of weaners and body condition scores of breeders.

It’s used for bone and teeth formation in conjunction with Calcium (Ca). The skeleton is where P and Ca are stored for animals to control their own supply of these minerals.

P is a large component of producing milk. P deficiency reduces the quantity of milk available to progeny, moreover, reducing their weaning weights.

The level of P deficiency will usually correlate with mortality rates. As P deficiency reduces appetite and feed conversion, it’s likely cows will suffer from metabolic issues such as ketosis and milk fever. Low cow condition will also lead to higher calf mortality from reduced milk production and mothering ability.

Phosphorus is stored in the skeleton; cattle can store or draw down on these reserves when they need it.

Growing stock, lactating cows, and cows in late pregnancy have the highest requirements for P.

How and when to test for P deficiency?

Blood Testing for Phosphorus is the most accurate way to determine if your livestock are P deficient. Blood tests measure the ‘plasma inorganic phosphorus’ levels in their blood, which indicates dietary P intake.

Faecal P tests using wet chemistry and NIRS tests can also be used as a guide because faeces are the main excretion pathway from the body. However, test results can be limiting without pasture or ration samples to estimate dry matter intake in conjunction with Faecal tests.

Soil testing can also indicate phosphorus deficiency however, mapping can be expensive because there’s usually a range of different soil types in one paddock meaning multiple tests would be required. When choosing which animals to test, if possible, choose animals that have had no phosphorus supplementation over the wet season leading up to sampling. If this is impractical for your property, do not supplement phosphorus for 2 weeks before sampling. Young animals such as weaners and heifers (dry or up to end of 1st trimester of pregnancy) are the most accurate class of stock to test. Please contact your local Veterinarian to arrange collection of blood samples.

‘The property was struggling to achieve acceptable calving rates or preg-test rates. There was also a high variance in the size and development of calves…

We commenced using the BLM White Cap product in April 2012… At weaning (May 2013) we preg-tested the entire herd as per normal procedures. We were stunned at the result. No paddock recorded less than a 20% improvement on the historical average for that paddock/mob, with every paddock exceeding previous conception records.  Condition score was greatly improved, milk production was superior and strength was markedly different from that which we had previously experienced.

How can BLM help?

BLM White Cap is a 3 in 1 liquid supplement derived from seagrass and kelp containing naturally occurring amino acids, fulvic acid and chelated major and trace elements, particularly Phosphorus. Fulvic acid is a natural electrolyte that improves absorption, availability, and retention of the nutrients in our product. The powerful ability of fulvic acid to bond, dissolve, and transport nutrients into cells, acting like an injection, makes it last up to 6 weeks in the animal’s system. The simplicity of dosing cattle once every 4-6 weeks, rather than daily dosing saves you time and money.

BLM White Cap also enhances feed conversion by providing amino acids and fulvic acid in dry times, when the availability of protein in feed is limited. Amino acids also increase protein availability during dry seasons where P absorption can be detrimental without adequate protein in their diet. These two important components of our product enable cattle to maintain condition scores, while improving fertility and weaning rates leading up to the wet season.

By supplying amino acids naturally from seagrass and kelp, not via urea, makes Beachport products safe to use in the water supply alongside traditional urea-based blocks and licks. The upside is, it also improves the availability of licks and blocks to livestock, and in some situations can reduce consumption of these without compromising their benefits.

Get in touch with one of the Beachport team.